Well after an 11 hr flight through thunderstorms and 4 movies I made it to Rio with no sleep. I negotiated my taxi fare…go me… and we went straight through some road works on the way to the hostel. Bollards….what? Rocked up to the hostel and works out I’m staying in an ex red light district. They say ex but I’m not so sure although mainly male. You know what I’m saying! To be honest it was a relatively  easy journey. The hostel is great and the people incredibly friendly although that may be due to the drunken state they are in for most of the day. I arrived to beer ping pong and happy hour……every hour. Two vodka sprites $12 BRL (just over £2). It works in our favour. Needless to say day 1 resulted in a few drinks then bed. Early by Brazilian standards it would seem. I’m writing this at 1.30am and I’m the first back!

The weather looks as if it’s going to turn so today I maximised on the 30 C heat and glorious sunshine and went all out for the views. Christ statue, sugar loaf some Brazilian folk art and the beaches of Ipaneema and Copacabana. 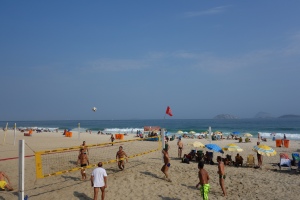 I have to say I had no idea how to get back from sugar loaf and it was getting dark..queue my introduction to the Rio tube having gone way out of my way. All being said it is relatively straight forward and air conditioned….praise the Lord. London has a few things to learn about air con although their bus system is far better. Wait for a bus? 30minutes……what! Is it a night bus? Things do not move fast in South America which whilst frustrating’ when you don’t have city mapper, adds an element of surprise and joy.

So some things you may not know about Rio:

I am sure there are more but that will do for now. It’s now 2am and I’ve been dancing in a club in Lapa the bohemian quarter and managed to escape from some crazy (but lovely) German guys to head back to the hostel. Tomorrow looks lovely hot and cloudy so I may explore the latest cal area and possibly the botanical garden which are supposed to be nice. Ohhh…. I seem to be eating bread and cheese in various forms so no comments on pictures please 🙂

One thought on “Christ! Her name was Lola?”